Planning the trip home is hard.  I have to avoid my natural inclination just to head home, and instead keep exploring. It’s also hard as I want to go inland and the distances between towns are huge – it’s harder to make adjustments than on the coast where things are close together.  I’m also a bit sore & don’t want to over-commit & have to ride long distances while tired.

So I did some calculations & made a conservative plan – the things I know I want to do are to ride up the ridge to Toowoomba, go to Tamworth, stop in Gilgandra and probably come home via Oberon (my real goal was to get to Cobar, but the distances are just too risky). 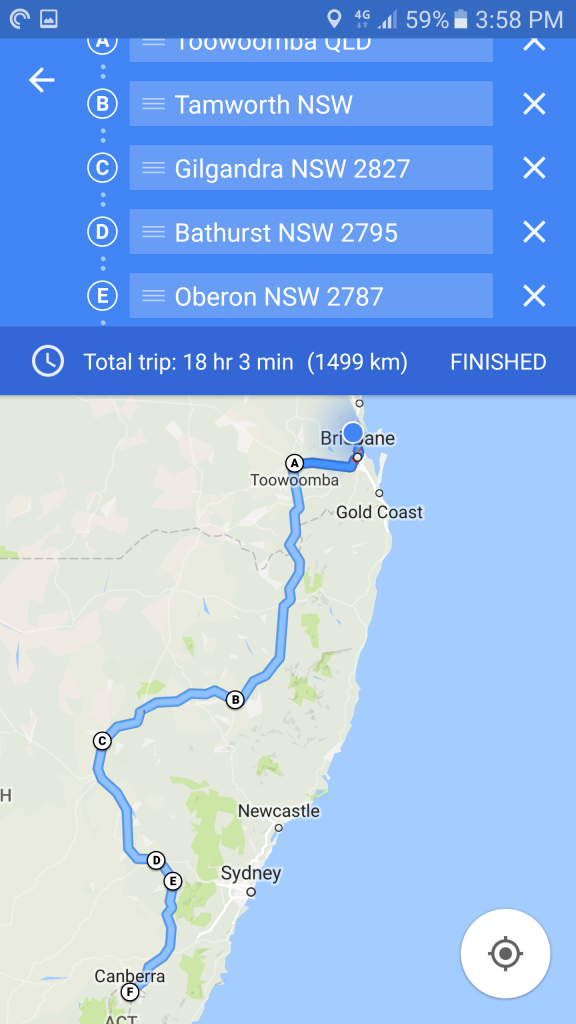 I set off super-early, being on NSW time in Qld: 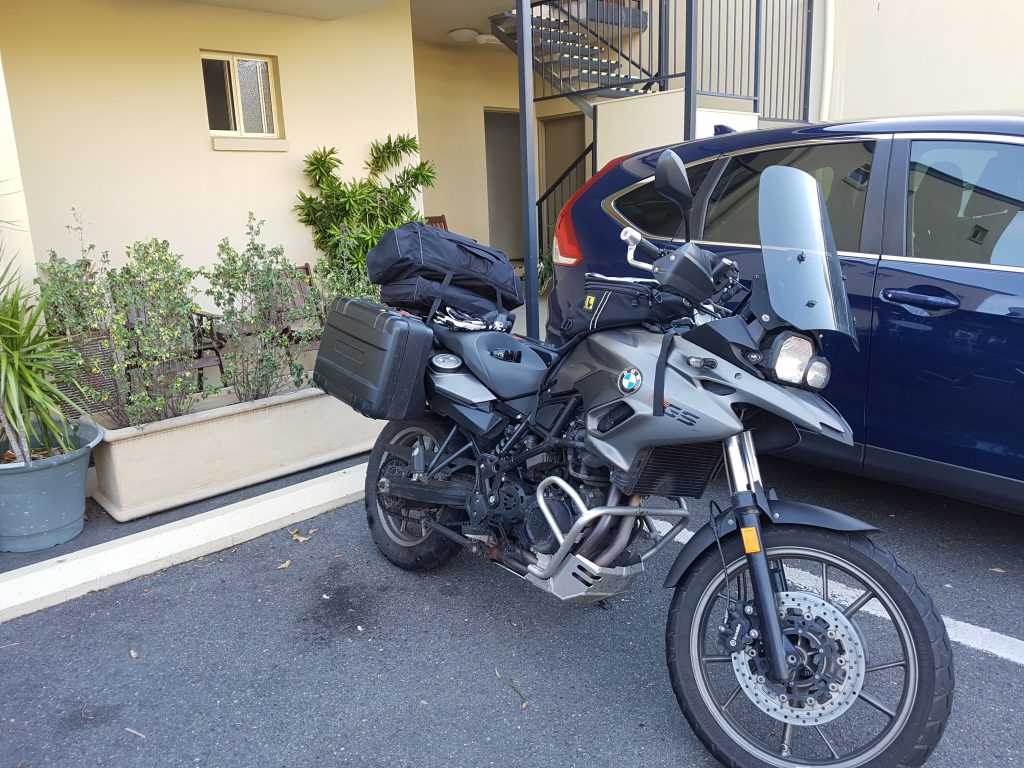 And headed towards Toowoomba. After a GPS fail that landed me in the Brisbane CBD, I got on the right highway and spotted a big thing that I had forgotten I would pass, where I had a coffee: 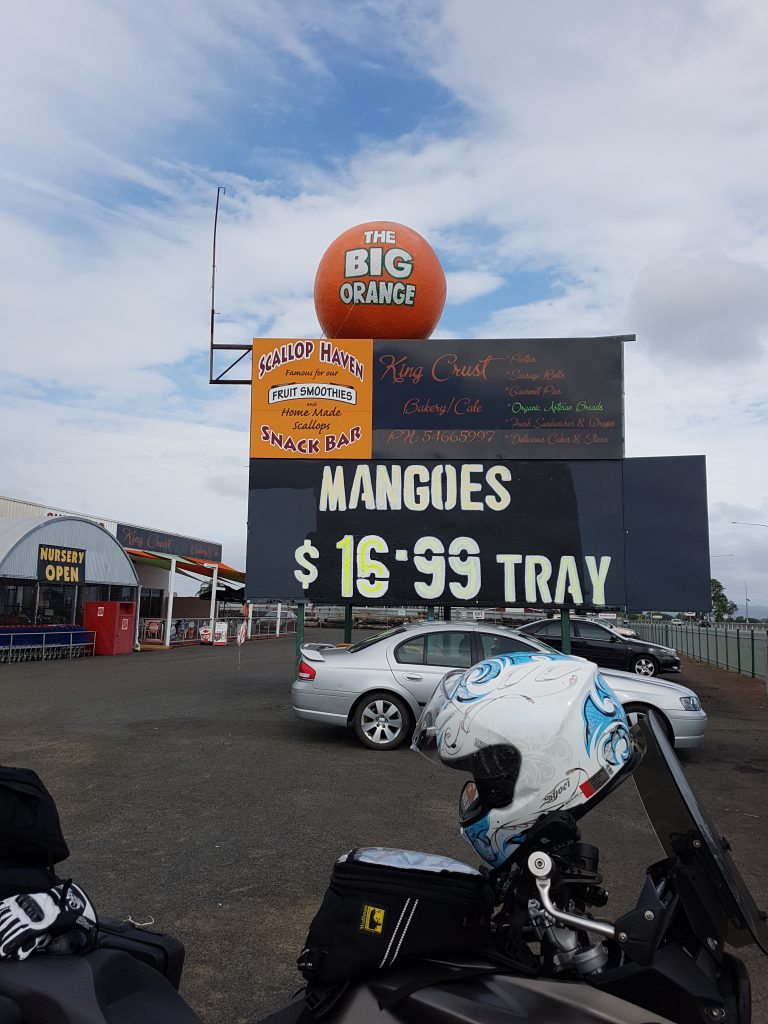 Up the ridge into Toowoomba, with all the trucks, going super slow (but that’s what I expected) and I headed down the New England Highway, where I did this for many hours (and learned that if you stop for a quick photo, hold your bike between your legs and a truck gusts past…): 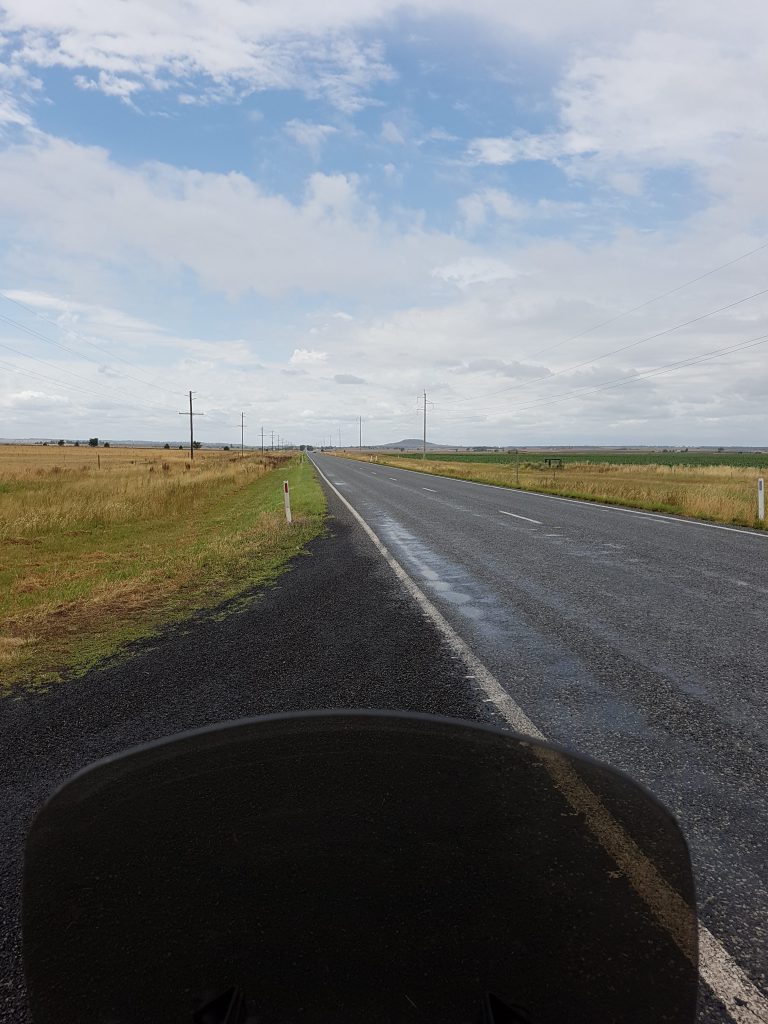 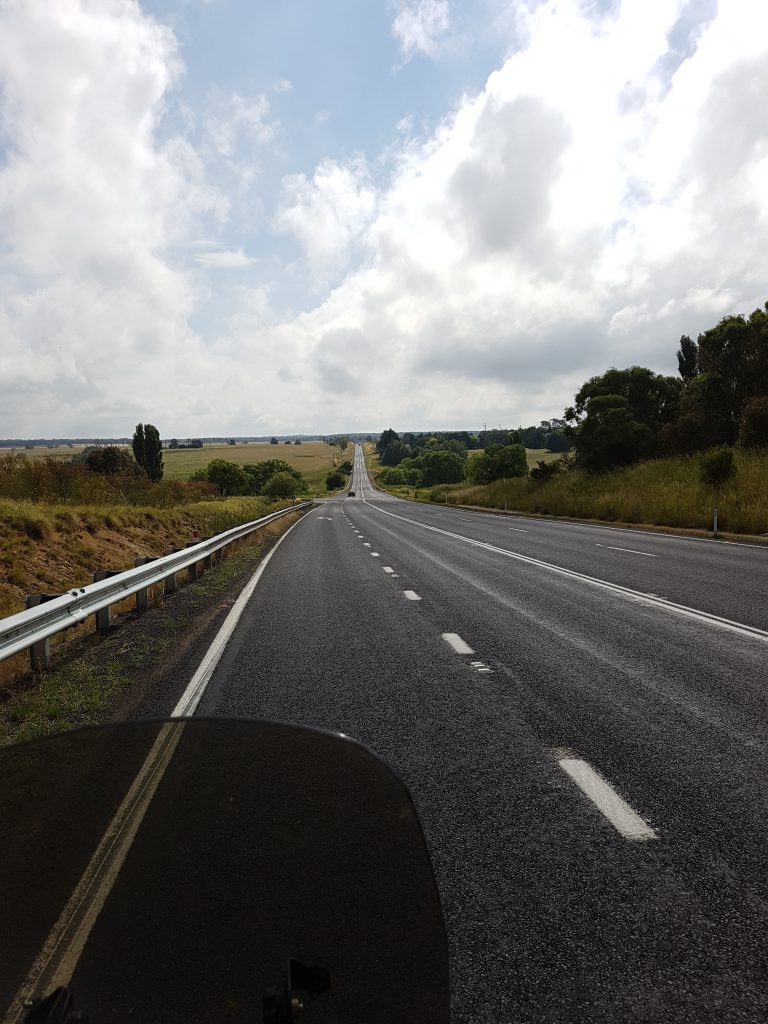 Actually, I’m being silly… I’m not like most bike riders. I love this kind of road. I am completely happy to potter along inland, single lane highways for days on end. As long as there are a couple of curves somewhere to break the monotony. I think this countryside is gorgeous. The small and medium towns are also gorgeous. I was happier today pottering around farmland, seeing all the beautiful golds of the fields, greens of gum trees and blues of distant hills than I was on motorbiking roads in the mountains yesterday.

I picked up two more big things as well: 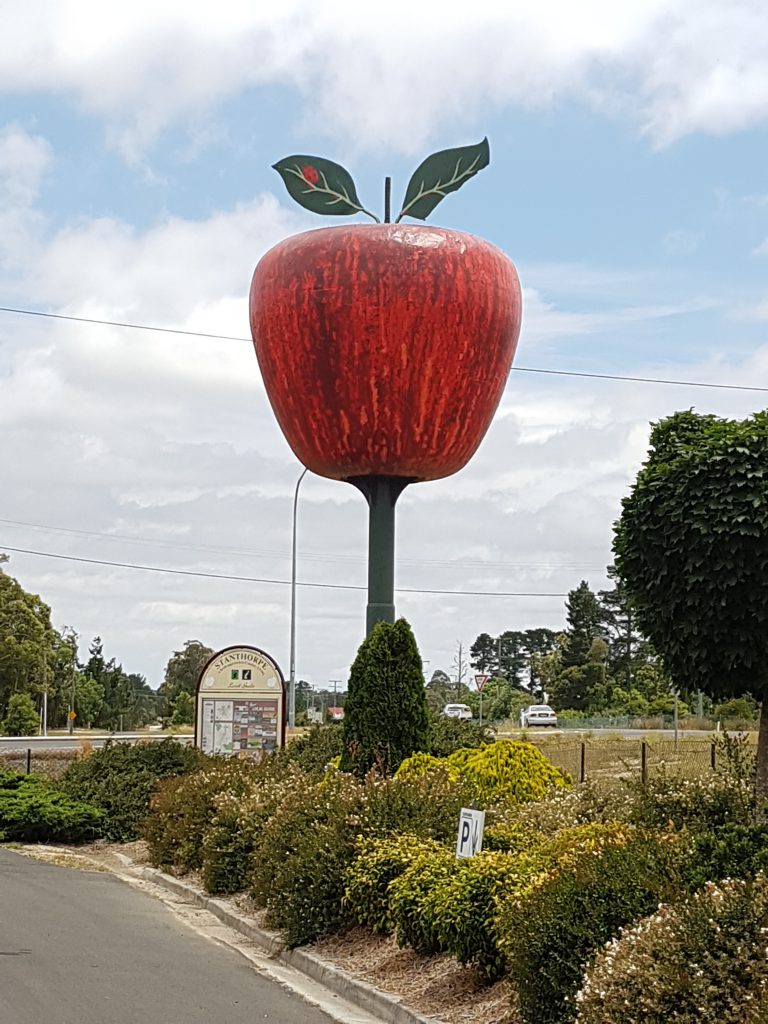 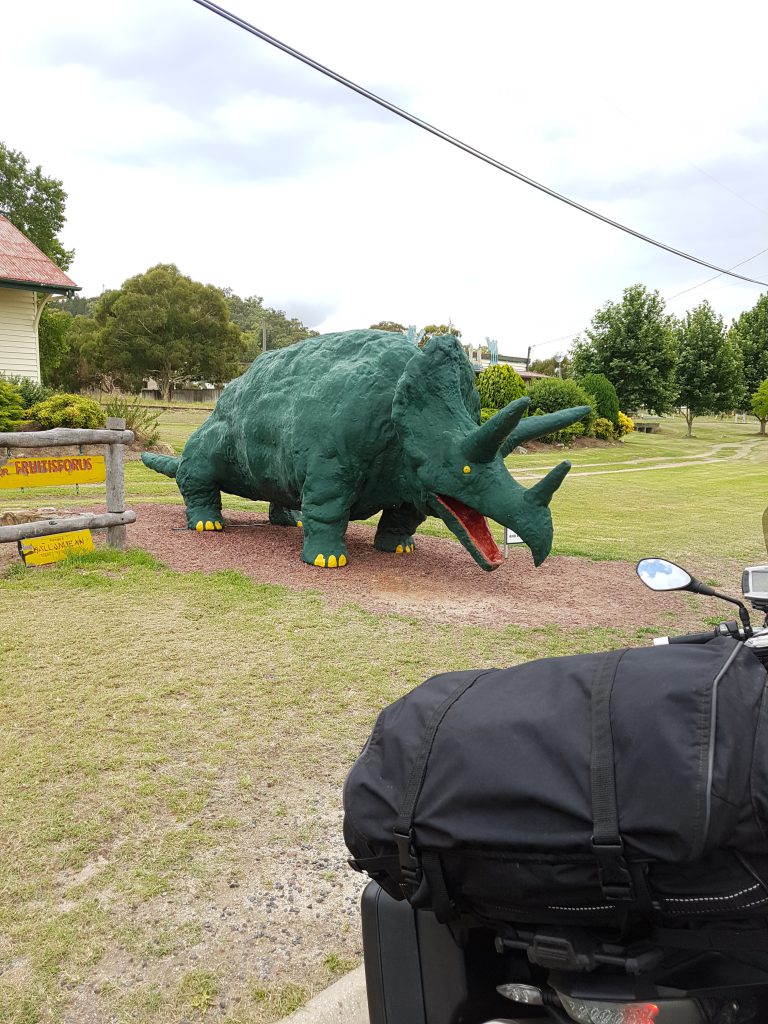 I made it to Glen Innes by about 2:00 and had a decision to make. I could head west to Inverell (which according to a lady I met at lunch, who offered me ‘something to read’, is really pretty) or keep going South and see if I could get to Tamworth. I’d already ridden 60km through the forecasted storm, the radar was clear, and my hands were feeling OK (nothing else was sore today, just my hands) so I decided to try for Tamworth. I booked a hotel and my estimated arrival was 5:00, which is about the latest I want to get in to somewhere. 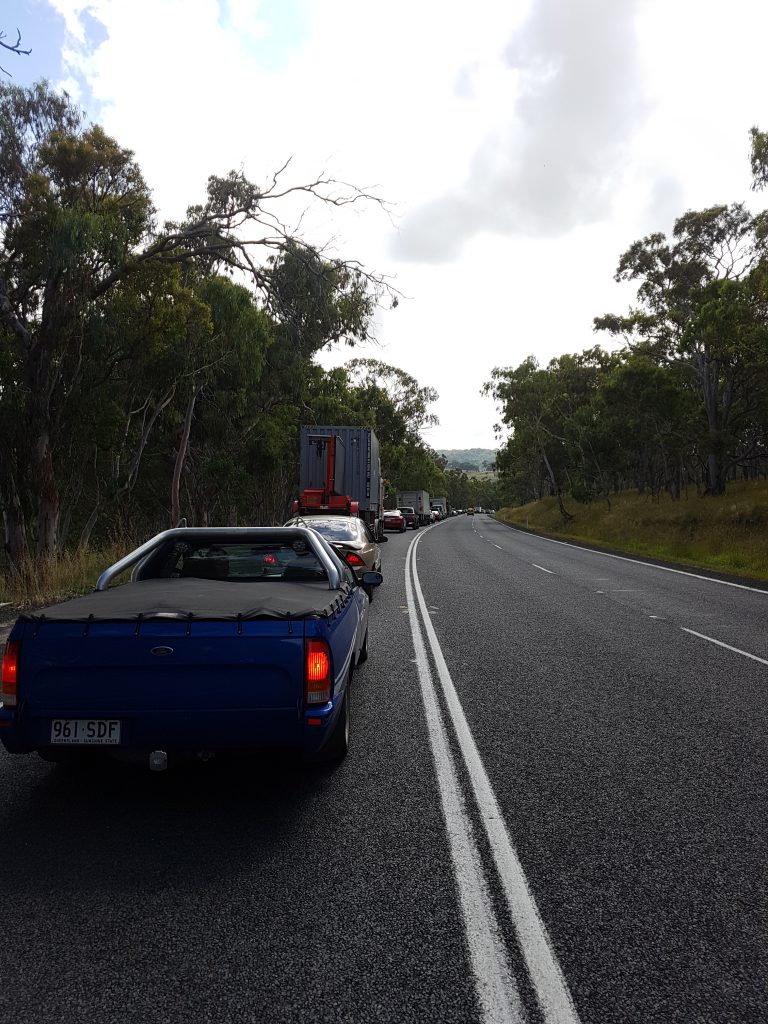 We waited for about half an hour, in which time my GPS headset ran out of battery, and were diverted onto what looked to be a very old version of the highway. Turns out it was because a young bloke in a 4WD and a concrete truck had an altercation on a very narrow part of the road and closed the highway, which is sad, though apparently everyone is as OK as it is possible to be when that happens.

Anyway, I finally got to Tamworth to find my very pretty hotel: 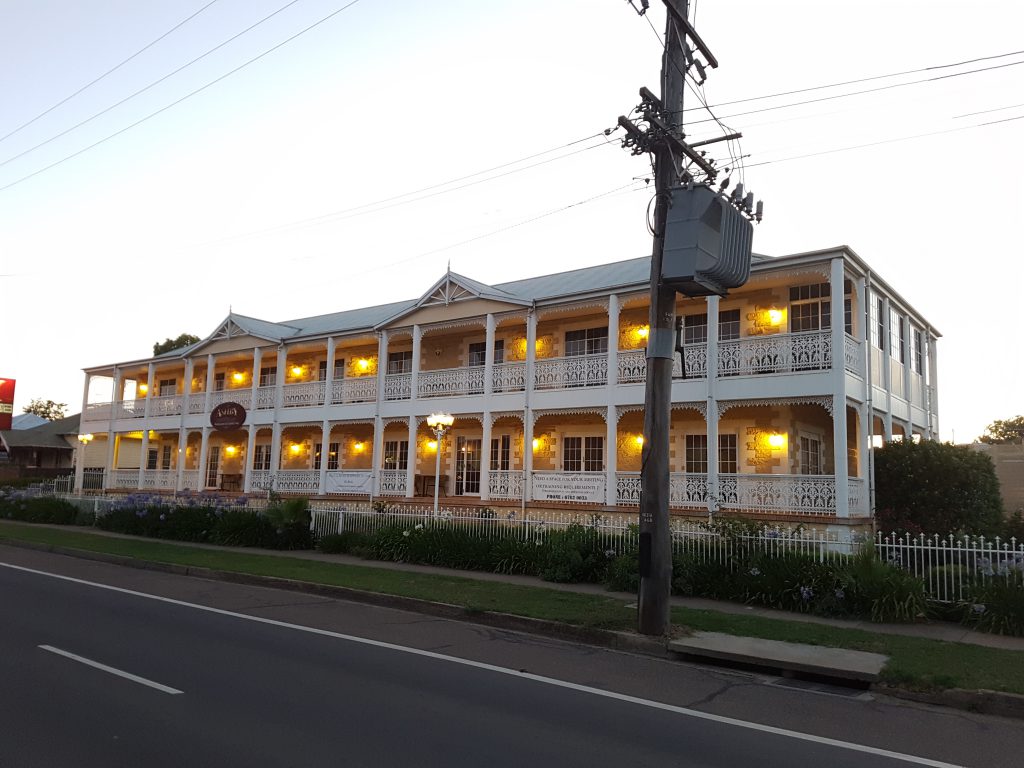 The Ashby Motor Inn, where I am on the balcony writing

though I wish I’d have booked this one instead: 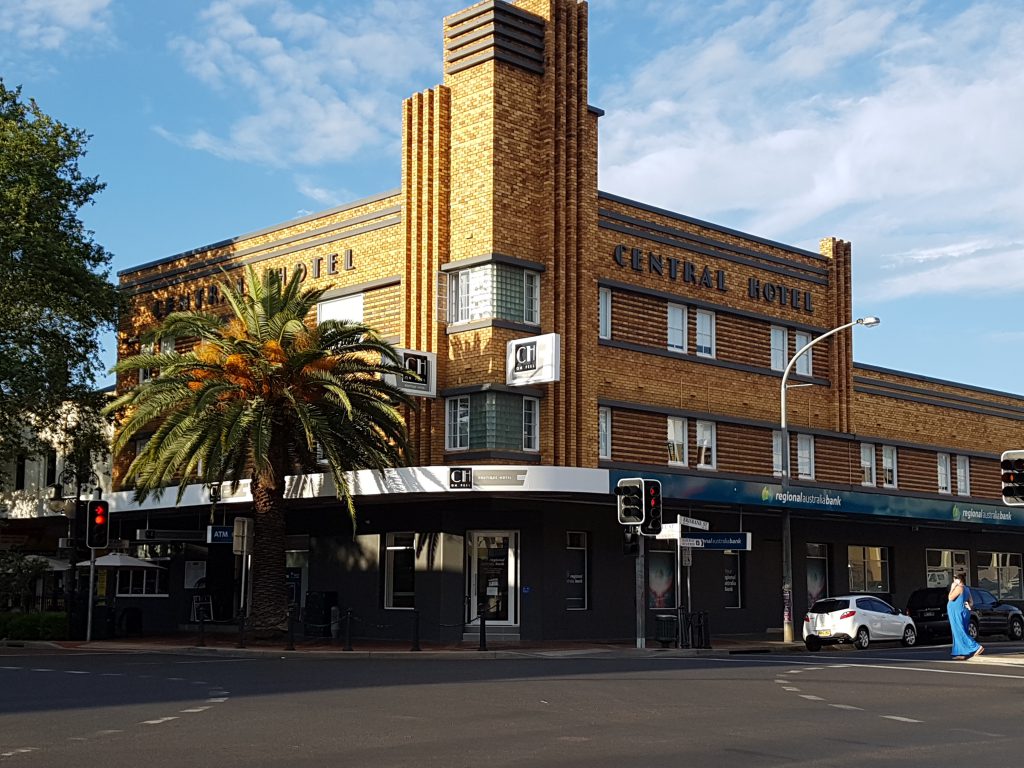 I’d made such good time today that I thought I might be able to still achieve my real goal of getting out to Cobar. Then I lubed my chain and found it very loose. “No worries” I said, and got out my trusty toolkit, only to not find a big enough socket. “Damn” I said and decided that I would have to abandon the Cobar plan, find a mechanic, fix the chain, and make a different plan. Then on the way to dinner I discovered there is a bike shop right next door to the hotel. So I think I can *sleep in*, get my chain fixed, get the MAJOR BIG THING, go to the motorcycle museum and then head out. I need to go and do some distance calculations, but I think it might be possible, especially with a packet of band-aids I just bought for my sore hands. And even if I can’t make the Cobar plan, there are still plenty of super-pretty places to visit between here and home.