It’s been far too hot to ride recently – around 37°C for the entire week (and it starts getting hot too early to get a ride in).

I did get out on one great ride on the Australia Day holiday – about 11 of us spent a few hours on the back roads before settling in for a burger at Jugiong. That was fun – after saying I could probably manage 80 on gravel roads, I managed a top speed of 112 before it got a bit wobbly (my top speed on tarmac is only 124). But most importantly, I kept up with the group (of mostly big bikes) all morning.

I also got some practice in a friend’s paddock – doing slow speed stuff, learning to lean the bike right in, initiating turns with my feet and getting off the handlebars. I also channelled my inner 10 year old by riding sitting down, half off the seat, with a leg thrown forward for balance. All good practice that I can’t get while on rides.

But otherwise, (well, apart from this thing called work that I occasionally have to do), I did some playing with the bike.

There seemed to be three options – lowering via the shock (apparently about 3/4″), getting a lowering link, or lowering the seat. I’d really prefer not to play with the clearance if I can avoid it, and I had bought a spare seat foam a while back, so thought that would be the best, first option.

I pulled the seat off and looked at the spare foam. There’s a ton of foam in there! I’m only 70kg – surely I don’t need that thickness of foam to support me.

I drew a revision of about 1cm, and cut it down (haha, with one of my best kitchen knives). It was pretty rough, so I grabbed some sandpaper and sanded it until it was smooth enough, then glued it back to the seat base and re-stapled the cover.

This simple change dropped my heels by about 2cm. I still couldn’t flat foot it, but I don’t really need to – I just needed more grip with my toes – I could finally push back while sitting on the bike, and felt more able to get to the ground if I needed to.

After the last ride, I looked at my tyre, and it was doing something very strange. Half of the tyre (around the circumference, not across it) was almost worn right down, and the other half still had 5-6mm on the central knobs. After a bit of asking around, I concluded that it was incredibly out of balance – it has one rimlock and it’s right near the valve stem. This combination means that one side of the tyre is heavier than the other, and results in uneven wear. I’m not sure, but it may have been made worse by a 400km tarmac ride on a 44°C day!

So I got a new tyre (a D606) and asked them to balance it. Just look at the weights they needed to balance it! No wonder it was out of shape.

Before I changed the tyre, the bike vibrated so much that I usually wore cycling shorts when riding any kind of distance. With the new, balanced tyre it’s beautifully smooth.

I had been wearing Gaerne G-Adventures. I bought them in Italy, using my limited Italian and much hand waving, and carried them in my backpack all the way home. They’re great boots – super comfortable and easy to walk in. They are so comfortable that I rarely think about my feet at all. Except when I’m standing on the pegs for a long while – then all I think about is how much my arches hurt and how I want the ride to end. It also seemed to be getting worse – starting to hurt earlier in rides, rather than my feet getting stronger. I needed something with a stiffer sole, and something that would protect my ankles a lot better if I fall under the bike.

The incredibly hard thing about finding good boots is that I have girl-sized feet. I wear a European 39 / UK 6. Most of the boots that were recommended to me start at a Euro 40 (except Garne SG-10s, which come in a 39). The bigger problem is that retailers don’t carry boots that small. Because clearly, girls don’t ride! (BTW – there are no appropriate boots in women’s styling). I asked at my local shop and they were happy to get me in a pair of Sidi Crossfires, with no obligation to buy them if they didn’t fit. That was awesome! Then when I tried them on, they fit well enough – with an innersole to support my arches better, they are pretty much perfect. They have a reputation as a narrow boot, which was perfect for me. It took me a week of wearing them around the house to soften them up for riding, and I can’t lift my toe high enough to change gears without lifting my foot, but that’s ok.

But now I can’t touch the ground again

The combination of a higher profile tyre and a boot with a stiffer sole means I could only just touch the ground again. I couldn’t push the bike forward or back.

I only took 1cm out of the seat first time, and there was still plenty of foam where I sit, so I took to it again, this time removing another 1cm. I didn’t want to slope the back of he seat, as changing the angle of the seat could make it uncomfortable to ride, so I cut it down square.

The result was excellent. My heels almost touch the ground and I can push the bike around if I need. I feel safer if I need to stop, and the foam is still supportive for riding. Win!

I took it for a run with a friend on the weekend and it was most excellent. I missed the shifter and brake a couple of times with the new boots, but that was the only issue. I felt comfortable and happy on my bike. Here’s a pic from the top of Tinderry Rd. 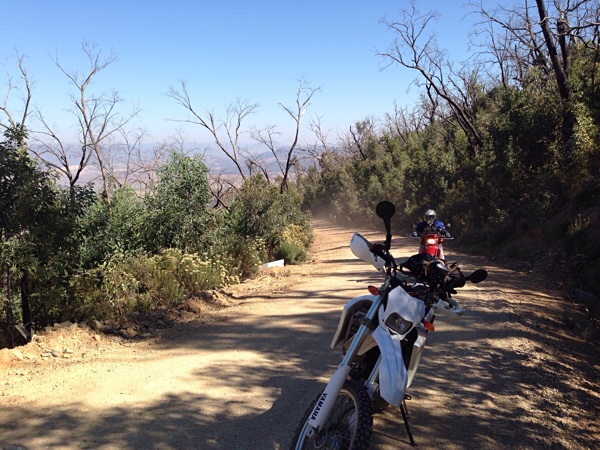