[Intro: I’m switching direction again – from personal development to motorbiking to sewing. I design stuff, patternmake and sew; and I thought I might share some of my projects…]

I’m studying a Diploma in Fashion design and for an assignment had to design a mini spring/summer range. Amongst other things, I sketched this dress:

Which turned into this flat: 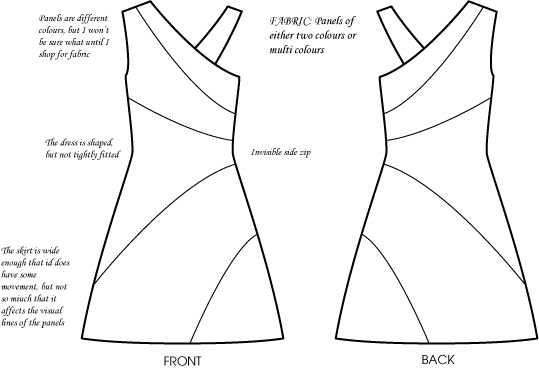 I actually thought I wouldn’t be able to make this – it depended on being able to find colours that went together in the same fabric. I don’t have very good access to fabric stores so went shopping to look for things for another project. You can imagine how surprised I was to find these, all in lovely-quality linen:

The pattern is pretty simple. It’s from a standard dress block. I removed ease under the arms, moved the shoulder dart to the side seam, let out the waist darts a bit, widened the skirt and then drew in the neckline and panels. You can see most of it in this photo. The reason there is so much drawing on it is that there are a couple of stages of modification, each in a different colour (green is the final pattern). It’s messy, but easier (and more accurate) than tracing it for each variation.

I did make a toile, but the photo is fairly awful. I just traced the pattern straight onto the calico – again, that was much easier than cutting out the pattern and then cutting the fabric. I made it all in one piece to check the overall shape – I didn’t’ bother with the panels just yet.

I made a prototype out of sheeting so I could double-check the pattern and see what the panels looked like, and it turned out great. All I needed to change was to narrow the skirt a bit.

I love the prototype – it’s almost wearable except for the fabric.

There are a few little pattern features that may not be obvious:

And here it is – the finished dress!

I really love it. I’ve worn it twice already. It fits perfectly of course and is really comfortable. The linen crushes, but that’s just what happens with linen. I could even imagine making it again, which is unusual for me – I usually don’t use a pattern twice. If I did, I’d change the top angle of the centre panel to be less straight across the body – it’s a bit straight and visually wide, but that’s the only thing I’d do differently.

A new year: Cleaning up, setting up, restarting